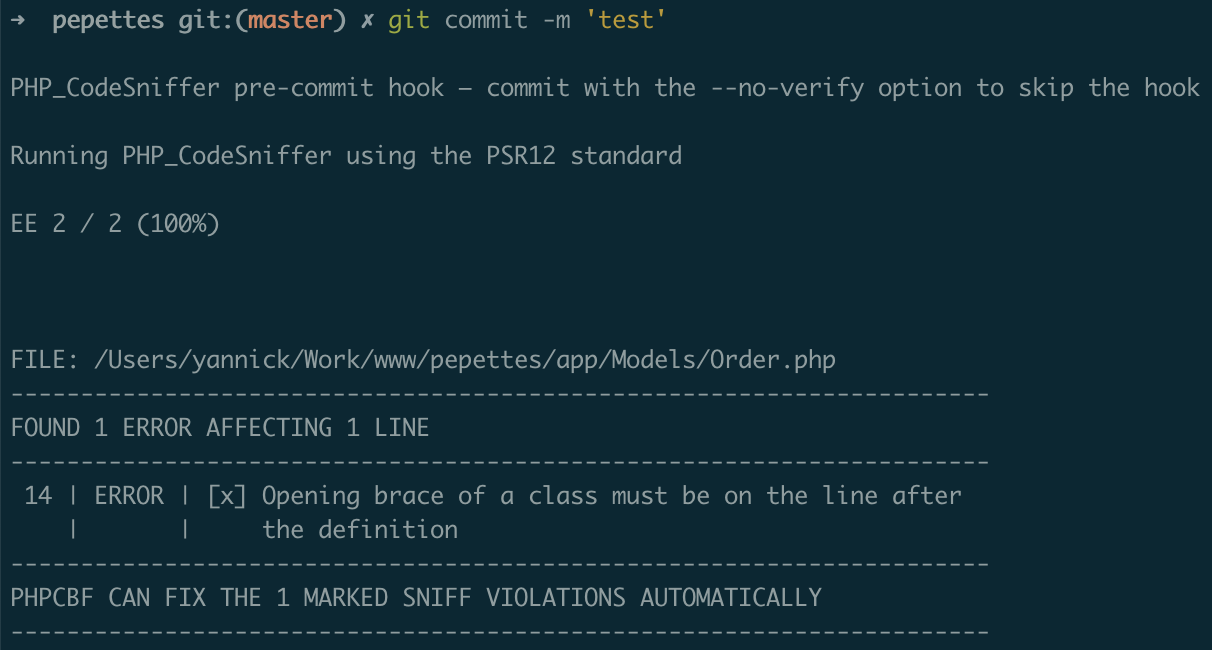 Git hooks are scripts that are run every time a specific Git-related event happens, like a commit or a checkout.

They can be used to do a lot of different things; a common use case is to scan the code which is about to be committed in search for violations of a coding standard, so they are fixed before the code is pushed to the repository, which is way quicker than letting the build pipeline flag them (or worse, a peer reviewer, who'd rather spend their time focussing on more important issues).

This is the kind of hook I was looking for for one of my projects, and since I couldn't find something simple enough I ended up writing my own.

PHP has a few coding standards flying around, but for the past few years the ones from the PHP Framework Interop Group (PHP-FIG) seem to have gained the most traction. They currently offer three different levels:

Each one builds on the previous one; PSR-12 was approved in September 2019 and supersedes PSR-2, which is now deprecated.

PHP_CodeSniffer is a tool composed of two different scripts:

Download the pre-commit file from the project's GitHub repository, and put it under .git/hooks at the root of your project.

Make sure it is executable:

Install PHP_CodeSniffer following one of the suggested methods – I personally like to install it on a per-project basis as a Composer dependency, but it's really up to you:

Once you've done that, you can update the STANDARD variable at the top of the pre-commit file to change the coding standard, or leave PSR12 by default.

The hook also assumes that PHP_CodeSniffer's bin folder is at the same level as the .git folder by default, but depending on the chosen installation that might not be the case. You can set a different location simply by updating the BIN variable.

That's it! For other standards and options, please visit PHP_CodeSniffer's usage page.

All you have to do now is commit some new code; PHP_CodeSniffer will analyse it, flag the violations if it finds any and ask you whether you want it to fix them for you:

It will also automatically stage the files it updates, and if it cannot fix them all, it will ask you to address the remaining ones manually.

If you want to commit anyway, all you have to do is to use the --no-verify option to skip the hook altogether:

Of course Git hooks are nothing new, and there are plenty of open source projects leveraging them, for all sorts of languages and purposes. In my case I was looking for something simple since I only needed a single hook anyway, but once you've got multiple hooks, managing them can become a bit of a pain.

I reviewed a number of tools and found this one that looked quite good, although I must admit I was a little confused by the concept of templates in introduces. This project also comes with a blog post explaining it in a bit more detail.