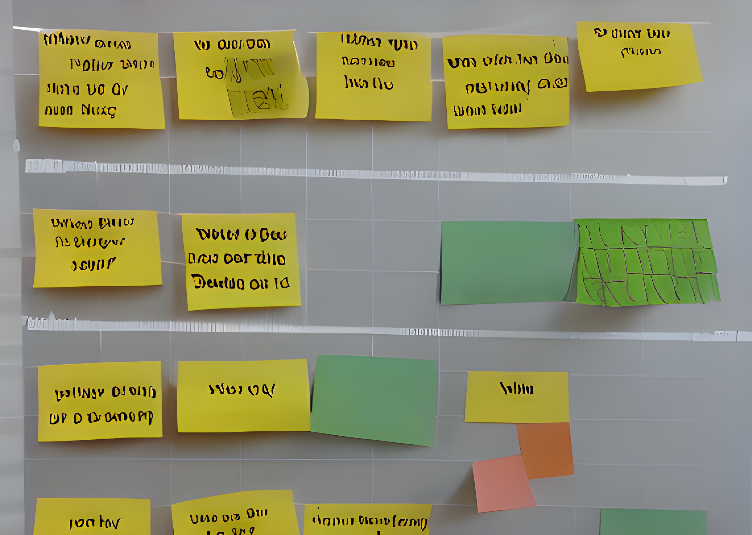 Extract from the transaction processing flow (made with Excalidraw)

The model is where the software meets the domain.

It is a technical expression of the domain that informs the development of the software while being understandable by the experts, who can validate it.

The goal of the model is to identify and express the use cases and constraints that will be built into the software, using schemas and diagrams. It is where we extract the essential concepts from the domain and where we consolidate the ubiquitous language.

There is no clear recipe to follow when it comes to modelling. Instead, there is a plethora of tools that we can leverage to express the model, some more or less suitable depending on the task at hand.

It's about finding the ones that will successfully inform the implementation of the software.

I wasn't sure where to begin and looking online for answers was mostly adding to the confusion, everyone seemingly using a different approach.

As I felt inertia creeping in, I decided to have a go and to start with what was screaming at me the loudest – transaction processing.

I checked the domain article again and as I was going through the various rules and examples it contains, I realised that I was looking at a bunch of "if this then that" scenarios.

I picked up a marker and drew the following flowchart on a whiteboard: 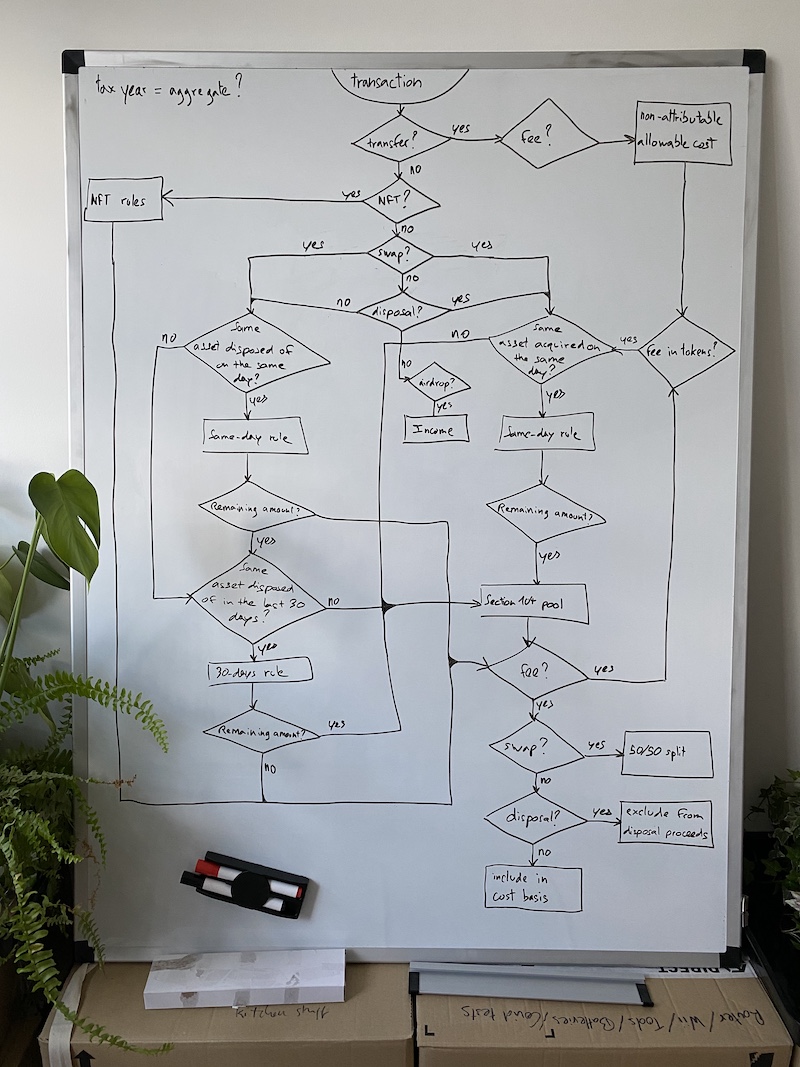 While I couldn't fit in all the details, the diagram covered all the scenarios listed in the domain and connected them in a logical way, without obvious gaps.

Satisfied, I made a digital version of it: 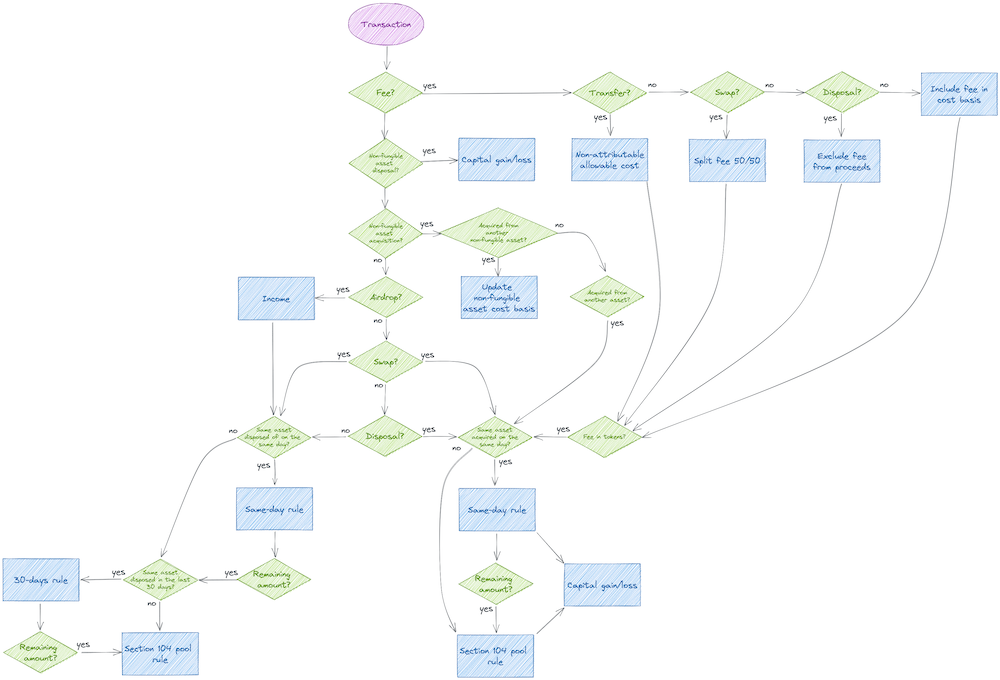 Most of the blue rectangles were quite high-level (e.g. "NFT rules"), but as I knew I could find the particulars in the domain article, I decided that it was good enough for now.

Looking at the flowchart, I realised I needed users to report their transactions in a way that would fit the logic.

So I started listing the reporting needs as user stories:

I went through the domain article again and added some implicit use cases not represented on the flowchart:

Note that I didn't mention hard forks – the reason is that they can be reported as regular acquisitions with a 0 cost basis.

I then added some more generic needs:

That got me thinking about the submission process, for which I came up with these stories:

In turn, that led to the reviewing process, where the user goes through the information returned by the software:

I thought of a couple more use cases for this one, extracted from the domain:

Finally, there's a fourth category of stories that only came to me later, during the code design phase – exporting the results. It's well and good to display the results in the terminal, but as a user I also want to be able to save the corresponding figures in a file for easy access.

I added the following stories:

But not all stories have the same importance. To classify them further and get a better sense of what would need to be built and when, I resorted to a tool I had used before – a user story map.

User stories and user story mapping come from the Agile world and are not inherently DDD practices. But they provide valuable insights that we can use in a DDD context nonetheless.

I'm not even sure whether they are better suited for the model or the domain, but as they help both the experts by listing the user needs in a way they can understand and the developers by sketching the outlines of the software, the model seemed like a good fit.

A user story map is a visual representation of user stories. It's a way to logically group, sort and prioritise stories that helps us identify and separate the parts that we need to build together from the stories that we can address at a later time.

This is the user story map I came up with for the application. It's interactive, so you can have a look around and click on the various stories:

The blue rectangles are the activities – the high-level tasks the user needs to complete. They match the four categories identified earlier – report, submit, review and export.

The yellow rectangles are steps – they represent subtasks the user has to go through to complete an activity.

Finally, the other rectangles are the details of each activity and step. They're essentially user stories, sorted by priority and broken down by iterations. Here, I've defined two – the MVP and the backlog.

The user story map provides both a roadmap for me to follow and a way to keep track of my progress. Moreover, it gives me an idea of the future bounded contexts and aggregates of the application, two key concepts of DDD.

I'll leave the aggregates aside for now as I consider them an implementation detail, but as bounded contexts can inform the model, I'll cover them now.

I'm going to be honest here – I am unable to give you a precise explanation of what a bounded context is. Like most things DDD, everyone seems to have their own definition (here is one, for instance).

But the gist of it is to separate the various parts of an application and describe how they relate to each other. That latter part is usually done with a context map, which I drew below: 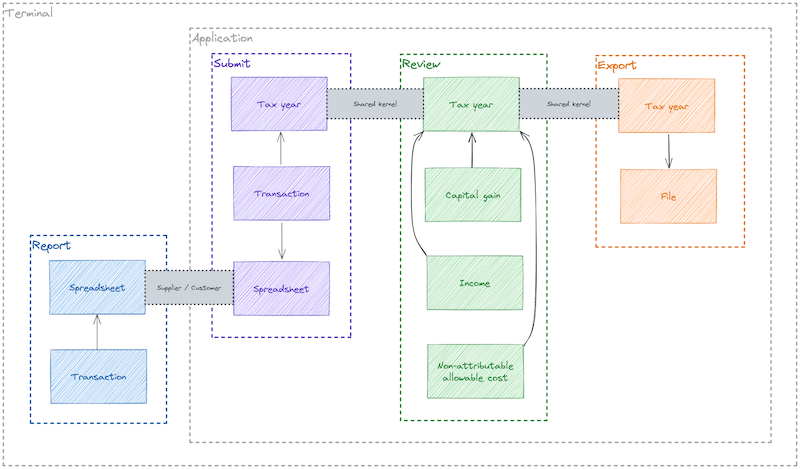 Context map (made with Excalidraw – click here for a higher definition)

Notice that the activities identified in the user story map have become bounded contexts.

We can also see that the "Report" context is external to the application, as the transaction spreadsheet must be created and completed upstream. Its relationship with the application is one of customer-supplier – the provided file (supplier) must meet the expectations of the application (customer).

On the other hand, both the "Submit", "Review" and "Report" contexts are internal to the application, and the tax year object bridging them is likely to be the same for all. In other words, they have a shared kernel.

This is the extent to which I will cover bounded contexts. While they can be useful to model the domain, in this case I defined them for the sake of the exercise more than anything else.

Bounded contexts are often worked on by separate teams and considered to be distinct models with their own ubiquitous language. But this is a one-man show, and the size of the model doesn't warrant breaking it up anyway.

When it comes to this series, the context map is just an extra way to represent and think about the application.

As the meeting point of experts and developers, the model is also where they use a common language – the ubiquitous language.

We can go through the diagrams and user stories to start establishing a glossary of key terms:

We came across most of these terms before, but by compiling them in this way, we crystallise them as words and expressions to use everywhere, including in the code. We formalise them.

I had the same difficulties approaching the model as I did the domain. Domain-Driven Design is very much an experience-driven discipline and starting without proper guidance can be a bit overwhelming. It took me a while to identify the right tools to express the model in helpful ways, and as I'm writing this I'm still not sure whether I went too far or not enough (although I suspect the latter).

That being said, I trust that the next steps will expose any gaps left in the model and the domain, and force me to revisit those to try and get a clearer picture.

The next instalment of this series will cover the code design of the application, which flows directly from the model.